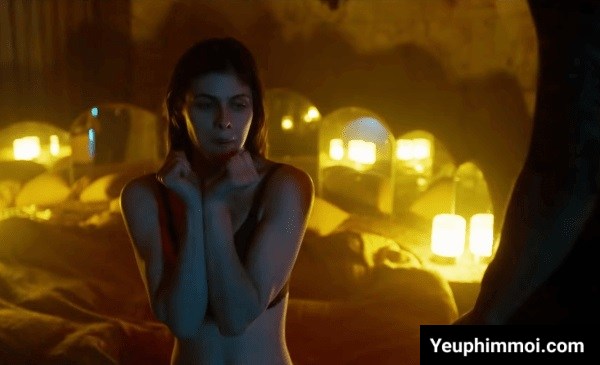 Margaret is an American expatriate living in Tokyo, Japan. She works at a Japanese flight academy during the day teaching prospective flight attendants how to pronounce English. She spends her nights getting drunk with fellow expatriates Ines and Liam and seeks out submissive sexual encounters with random men in the city’s numerous love hotels. Her nightly misadventures cause her to show up to work in a daze and disheveled, drawing the concern of her instructor Nakamura.

One day, Margaret crosses paths with a Yakuza enforcer named Kazu and the two begin a relationship. Margaret is at first taken aback by Kazu’s revelation that he is about to get married, but she gives into him when he admits that his marriage is more out of duty than love. Margaret confides to Kazu that she does not have a family: her father left when she was a child, her mother passed away from cancer, and she has a schizophrenic brother; and that she came to Japan to be alone.

On the day of graduation for Margaret’s students at the flight academy, Kazu asks Margaret to spend the entire day with him in Kyoto. Initially reluctant to skip graduation, Margaret agrees when he says he will not get another day and they take the train. He brings her to the Kiyomizu-dera temple and shows her the “Buddha’s womb”, a stone illuminated at the end of a pitch-black tunnel. Kazu explains the symbolism of being reborn reaching the stone and brought Margaret there hoping to help her let go of her trauma, but Margaret seems unaffected. On the train ride back to Tokyo, Kazu leaves the train while Margaret is asleep, leaving her despondent and desperate to find him when she wakes up. When she returns to work, she finds that she has been let go and replaced for skipping graduation.

Margaret spirals down further when Ines reveals to her that she is leaving Japan. Following numerous thankless sexual encounters, Margaret finally spots Kazu with his family by chance one day and follows him into a love hotel. Kazu reprimands Margaret for following him, telling her nothing can happen between them. When Margaret insists that she loves him, they have sex one more time before she leaves, leaving Kazu saddened and conflicted. When Margaret returns to her apartment to find an eviction notice, she desperately takes a job as an escort for drunken businessmen, but finds herself uncomfortable and leaves without getting paid.

Now homeless and at rock bottom, Margaret runs into Liam’s girlfriend Louise, who reveals that Liam had been deported. After sharing a drink with Louise, Margaret gets drunk and begins wandering around Tokyo aimlessly at night until she takes notice of a strange man following her and asks him to take her to a love hotel. She strips naked and lies on the bed where the stranger ties her up. When he suggests that he could kill her, she begs him to do it before Kazu comes into the room to rescue her, having followed her. Grateful for being rescued, Margaret decides to start anew by leaving Tokyo. On the plane, Margaret calls Kazu to tell him she now understands the symbolism of the “Buddha’s womb” and finally feels reborn before saying goodbye for good.